As the U.S. House of Representatives select committee investigates the January 6 insurrection at the U.S. Capitol, most Americans recall a very violent day and support Congress’ investigation. Eighty percent of the public consider the individuals involved mostly responsible, but 57% also say former President Donald Trump deserves a great deal or quite a bit of blame for the attack on the Capitol, more than said so at the end of January 2021. Nearly two-thirds of Americans say the riot was extremely or very violent, and about 7 in 10 think Congress should continue investigating the events of January 6.

Most Americans say the actual individuals who stormed the Capitol on January 6 bear the most blame. Half of Republicans and more than three-quarters of Democrats say the rioters bear a great deal of responsibility for the insurrection.

Last January, 50% of all Americans and 90% of Democrats said Trump had a great deal or quite a bit of blame for the attack by a group of his supporters.  At that time, 71% of Republicans said he had little or no responsibility. 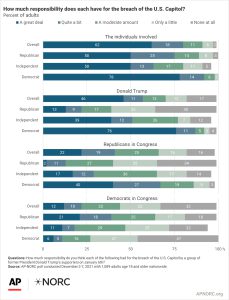 Democrats are much more inclined than Republicans to regard the uprising on January 6 as extremely or very violent. 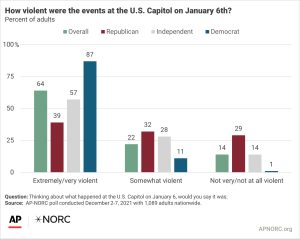 Opinions on the investigation also fall along partisan lines, with 96% of Democrats saying the Congress should continue its investigation into what happened on January 6, versus only 41% of Republicans. 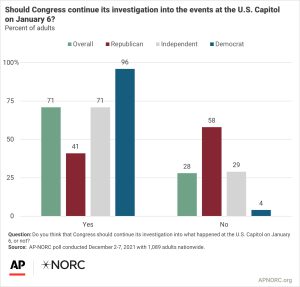 The nationwide poll was conducted December 2-7, 2021 using the AmeriSpeak® Panel, the probability-based panel of NORC at the University of Chicago. Online and telephone interviews using landlines and cell phones were conducted with 1,089 adults. The margin of sampling error is +/- 4.1 percentage points.

By Farnoush Amiri | The Associated Press January 4, 2022 WASHINGTON (AP) — The fighting — so primitive and ferocious that one Capitol Police officer described it as “medieval” and another as…

Views on the Democratic Party’s priorities, leadership, and future

Views on the Republican Party’s priorities, leadership, and future